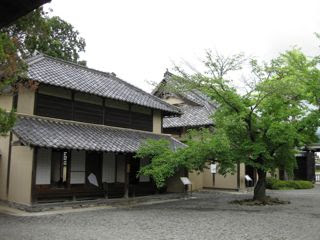 On July 12, I set up an installation and did an art performance called “Interchange” at the 'Bunbu gakko' (Samurai School for Literary and Military Arts) in the historical village of Matsushiro, located in Nagano prefecture, Japan. 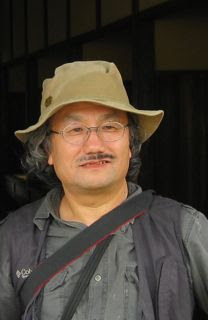 The MCAF was started by Japanese art professor Hitoshi Kimura in 2002 (the year of the soccer World Cup collaboration between Japan and Korea). Prof. Kimura wanted to also help to build peaceful relations between the two countries through art, and the reason he chose the beautiful village of Matsushiro as the festival site is because of its surprisingly dark but little known war-time history, involving terrible human rights abuse of hundreds of Korean civilians.

This tragedy happened during the final months of WW II, after the Japanese Imperial government had decided on a plan to construct a massive underground set of tunnels in Matsushiro to secretly house the emperor and the military command. This was part of the nationalistic ideal to fight to the death of every man, woman and child to protect the Japanese empire. 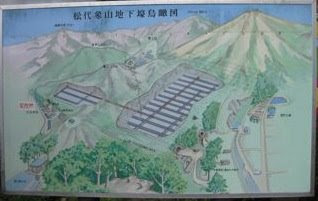 So in November 1944, the construction of the tunnels started under a mountain in Matsushiro. 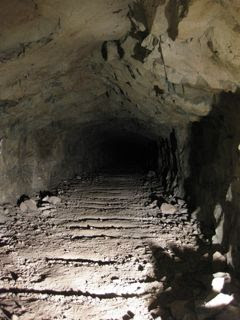 At that time Korea was under the colonial rule of Japan so many slave labourers (including female sexual slaves, now euphemistically known as “comfort women”) were brought from Korea for this top-secret project. Even the local Japanese people were not aware of what was going on, and they had no choice but to cooperate with the army's requests to surrender their houses and land. Even Japanese school children were made to give up classes to work to assist the war effort.

The Korean slaves were forced to work in appalling conditions and an incredible 13 kilometers of tunnels were dug in just a few short months. Many of the Koreans died from injuries, illness and malnutrition, but the actual identities and numbers of victims is unclear. Their plight was hidden because they had been forced to take Japanese names, and then all records of the tunnel construction were deliberately destroyed by the Japanese army upon their surrender in 1945. 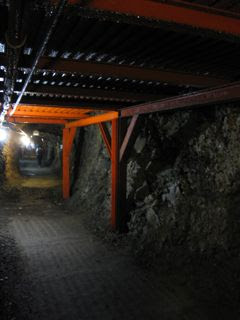 The existence of the Matsushiro tunnels remained a secret until the late 1980's when local high school students discovered them. After learning about the dark history of the tunnels, the students petitioned the local government to preserve them as a public peace memorial so the story could be made known to all people.

Today the tunnels have been partially opened and reinforced so visitors can walk a few hundred meters into the damp darkness and get a sense of the desperate struggle of those war time years.

Nowadays, each July the Matsushiro Contemporary Arts Festival is held not far from the site of the tunnels. All of the foreign artists involved in MCAF are invited to first visit the tunnels to gain first-hand experience and inspiration for their work. 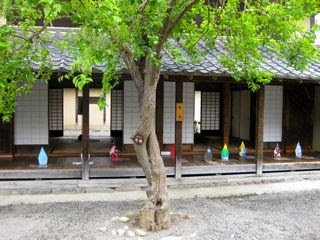 On July 5, 2009 Professor Kimura conducted a public workshop to make origami paper cranes as a symbol of peace, and these works were then painted and then photographed in the tunnels, before being installed in the 'Bunbu gakko' samurai school as part of the MCAF installation festival. 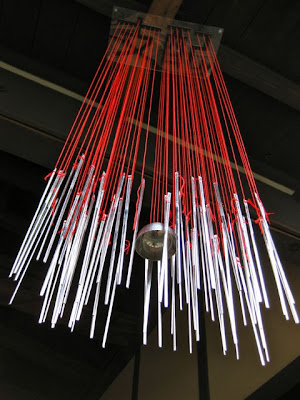 My installation was entitled 'Interchange' and was inspired by the issues of linguistic imperialism.

Because I have lived in Korea for many years I am very aware that during the time of the Japanese colonisation of Korea, Korean people were forced to learn Japanese language and to adopt Japanese names.

But I was moved very deeply by the realisation that the existence of the suffering and death of hundreds of Koreans in the Matsushiro tunnels had been almost completely obliterated through the use of language. 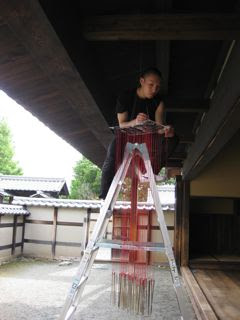 I chose to install the work on the verandah of the training room of the samurai school, "Bunbu Gakko". The installation consisted of the Japanese characters for “domination” 支配, from which were tied 70 stainless steel Korean chopsticks, individually hanging by red threads.

The stainless steel chopsticks are unique to Korea, and accordingly I chose them to represent the labor of the thousands of Koreans who worked as forced laborers or slaves to build the Matsushiro war-time tunnels. In the center of the chopsticks hung one small inverted stainless steel bowl, symbolizing the suffering of the Korean women who were brought to the tunnel construction site to serve as sexual slaves for the Japanese soldiers.

Although this work was overtly inspired by the Matsushiro war time tunnels, on a deeper level I wanted to express something about the universal spiritual side of the human struggle for liberation. I believe we must all make efforts to cut the ties that bind us to excessive fear and repression and find an authentic voice that can allow us more scope and freedom to build a better world. 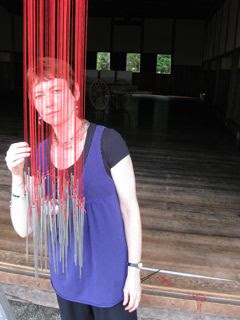 I chose the title “Interchange” for the work because it expresses the ideas of communication and exchange, rather than a ‘win-lose‘ battle where one way of thinking simple replaces another without dialogue.

In this performance, the artist worked with her outdoor installation, entitled "Interchange".

The performance began with the artist walking across the wooden floor of the samurai school training room, singing the old Negro spiritual song "Motherless Child". 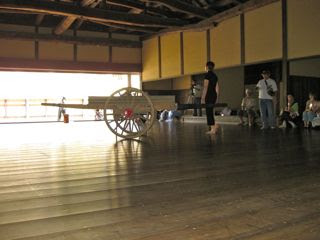 On reaching the hanging installation the artist brushed the hanging pieces to hear the soft voices of the metal pieces moving together. 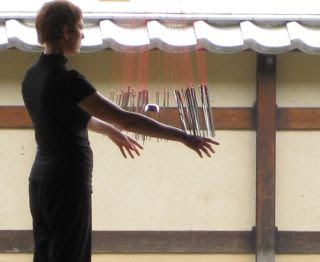 She then lay on the ground under the steel chopsticks looking up at the Kanji character for "domination" 支配. 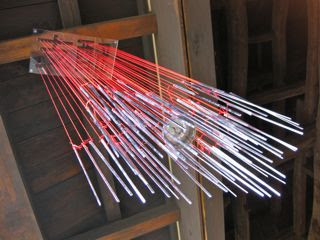 Then after a quiet period she arose and scraped the Korean Hangeul characters for “liberation” 자유 with her bare hands into the earth nearby, and then walked away. 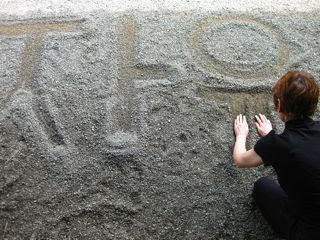 Here's a video of the performance and the artist's talk afterwards:


Final Closing Ceremony - July 20, 2009
The installation then hung on the verandah of the samurai school training room for the following week - and visitors could touch the metal chopsticks to make sound. 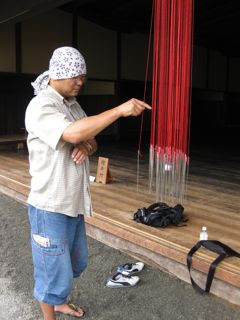 On the final day of the MCAF festival, the artist held a symbolic ceremony, and invited the Japanese people to help her release the chopsticks from the red threads. 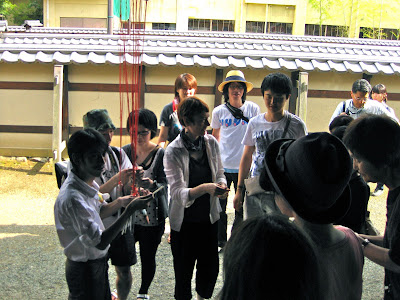 The Japanese audience members were then given a pair of the Korean stainless steel chopsticks as a symbol of goodwill. 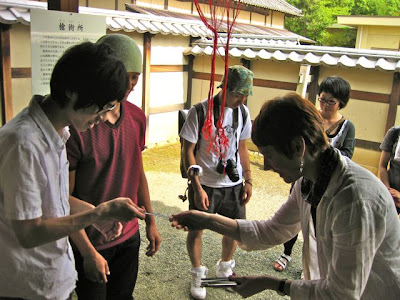 As a final act the artist pulled down the Kanji character for domination. 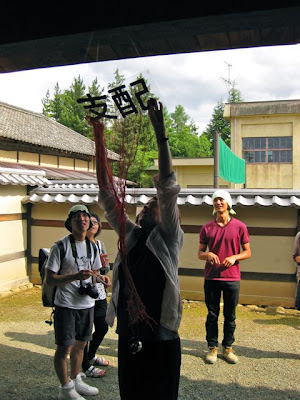 A warm thank you to Professor Kimura, Ms Kaori Haba, and all the other artists, student volunteers, management and workers of the Matsushiro Samurai school, and audience members who contributed to this special arts festival.
Posted by Penelope at 5:07 pm