The Book of Bright Ideas - installation 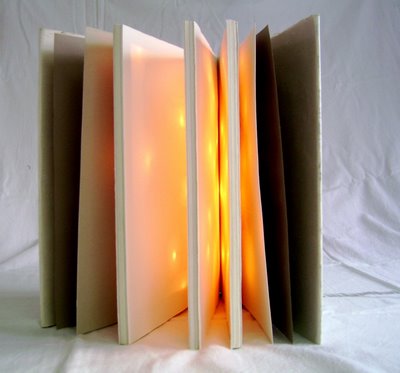 I just finished this work today. It is an 'artist's book' made for an annual exhibition of such books at the Noosa Gallery, Queensland, Australia.
The theme for this years exhibition is "10 + beyond", in reference to this year being the 10th anniversary of the artist's books exhibition.

So my book is called:
'The Book of Bright Ideas'
and this is an explanation of its inspiration:

"About 10 years ago when I was living in Adelaide, South Australia, I had a sudden vision of the swirling energy patterns of unmanifested ideas and forms beyond the blank pages of a notebook. Nowadays I live in Korea, and this book is my memory of that special experience".


The book is constructed out of a hardback book, and a string of 120 electric 'fairy' lights. 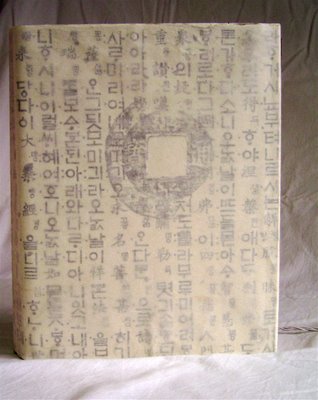 It was a big job to carefully glue 241 pages together and then install lights in cavities I cut out between the pages. (Especially when I was trying to get the glue to dry in the middle of the monsoon season!)


I wanted to express the idea of the spiritual inspiration and energy behind all creative work. 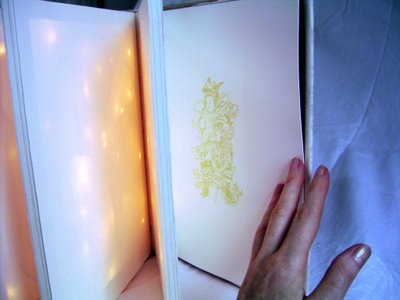 Posted by Penelope at 7:49 pm No comments: 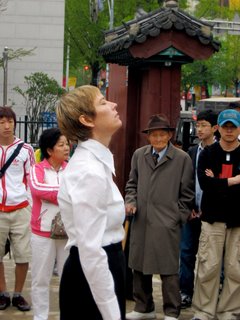 This performance was for the 2006 Jeonju International Performance Art Festival. The festival had a theme of "In & Out" which was explained as:-
"What does space mean?

We have closed space and open space

so then what is the basis of closed and open

and also what is the basis of closed space and open space?

Our ideas and actions may stem from this basis. However, there is no right definition of "in" and "out" in the power of arts.

How we can show the ideas about in and out through performance?" 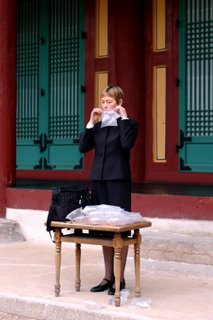 In this performance the artist expresses ideas about the modern industrialised way of life, which is based on the illusory concepts of separation, restriction, and the value of private property and individual identity. 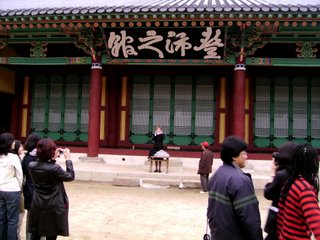 The artist is dressed in a black formal business suit with a briefcase. She removes small Ziploc plastic bags one by one from the briefcase and inflates one with each breath and seals it. 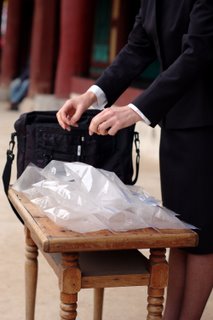 The inflated bags are progressively stacked up in an orderly pile on a table. Some slip off the table, and some blow away with the wind – this activity is ultimately meaningless and futile. 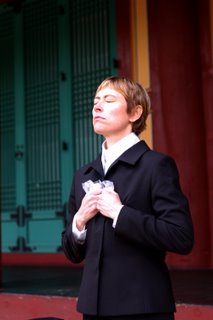 The artist then stops her production activity and bursts some of the bags. 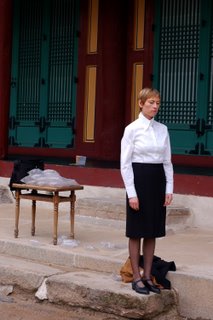 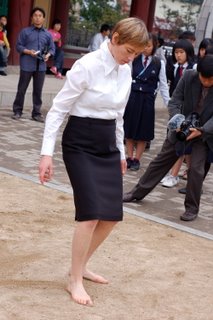 She then removes some of her restrictive clothing and walks barefoot in the wet earth, drawing curved lines with her feet. 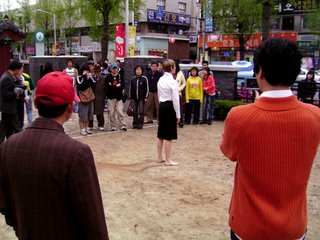 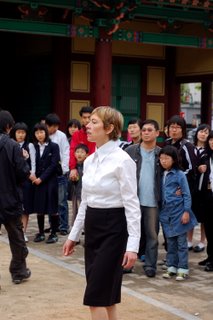 She then sings a song “Sometimes I feel like a Motherless Child” - a song originally sung by Negro slaves in America to express their separation and isolation. 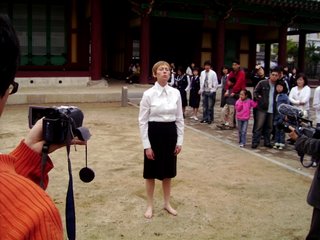 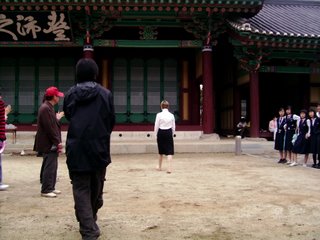 The venue for this performance was a historical complex of traditional Korean buildings, called "Gaeksa", located in the centre of downtown Jeonju. Originally, the Gaeksa was built to house visiting government officials, and included a meeting hall as well as accommodation.
Posted by Penelope at 2:14 pm No comments: