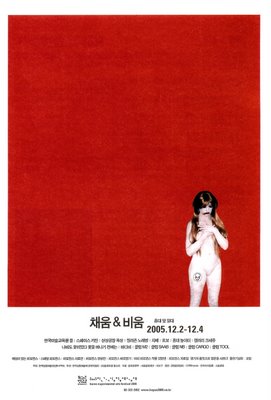 BACKGROUND TO BEAUTY MYTH PERFORMANCE:
The "Beauty Myth" performance developed out of my earlier work on the themes of women's body image and dis/empowerment.

The images from one of my previous performances of "Anonymous White Woman" were chosen for the posters for the KEAF festival in Seoul this year. The image used on the main KEAF poster was from the final part of the A.W.W. performance, where the anonymous white woman is experiencing bitter disappointment with her mortality.

In 2005 I chose to stop performing A.W.W. mainly because the preparation time was so lengthy – at least 2 hours for the preliminary body painting. But also, I wanted to make a performance that had a more positive ending for women. I developed the “Beauty Myth” which is about women’s lives being restricted by the societal expectations on them to “perform” as the beautiful object. In this performance the woman wears a dress which enhances her female shape but severely restricts her movements. In, fact like a classical Greek or Italian sculpture she is planted on the floor and only has one arm!

I first performed this at the Bucheon International Performance art Festival in July 2005, and at the end of the performance I escaped from the costume and ran at full speed through the shopping center. See video below:

This was meant to illustrate a woman expressing her power (how many times has anyone seen an adult woman running by choice at full speed anywhere?).
However, I felt the audience misinterpreted this action as the woman running away due to fear because she was no longer young and beautiful. 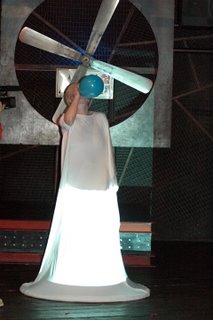 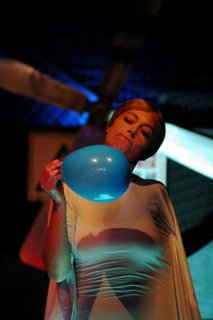 So for the KEAF festival I changed the ending so the woman stays put and achieves fulfilment within herself. I also wanted to make the performance more site-specific for the nightclub venue – the theme of the KEAF festival was “emptiness and fulfilment” in the space provided. Each artist was asked to use the particular space provided as an integral part of their performance.
So I made a psychedelic colourful video for projection onto my body and an accompanying soundtrack with plenty of bass. I used the spiritual theme with the Sanskrit Om symbol because I wanted to subvert the usual way that women are looked upon in nightclubs as sexual objects. 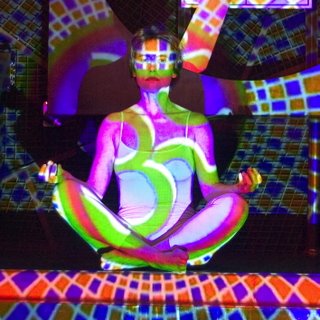