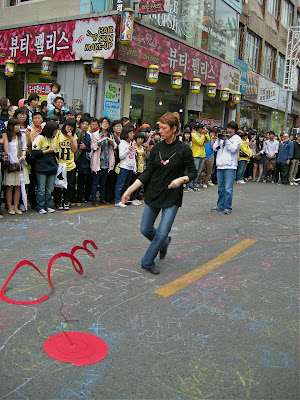 On May 2 and 3, I was invited to do some art performances in conjunction with the Jeonju International Film festival (JIFF 2009), in the southern city of Jeonju, Korea.

On the Saturday, May 2, there was a street performance art event in front of the main JIFF cinema area with many artists performing, accompanied by 2 Korean musicians playing a grand piano and keyboards.

My performance was a simple improvisation called 'Spring Play' based on 2 red spirals.

I asked a young Korean girl from the audience to "play" with me using the spirals.

We created rhythmical movements and patterns together, as the spirals twirled and danced in the wind. 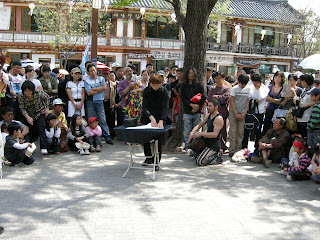 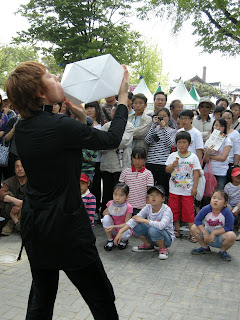 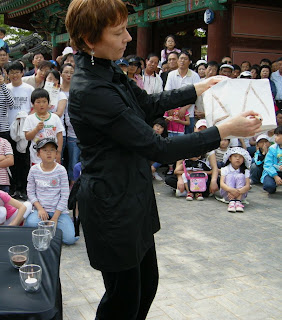 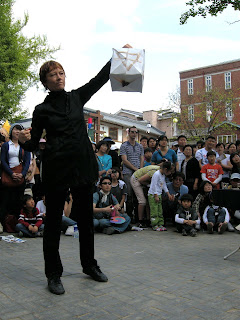 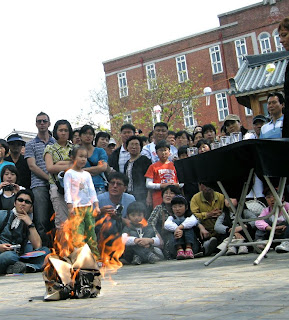 On Sunday May 3, I did a different kind of performance, along with 3 other artists at the historical site of Gyeongijeon Park in central Jeonju.

My performance was called "The Elements #3", and was based on the idea of working with the 4 traditional elements of air, water, earth and fire.

My performance actions were accompanied by the drumming of American artist/musician Ripley Torres.

First, I collected samples of earth, air and water from the local environment, lit a candle and set up 4 glass cups containing these elements on a table.

I then started by folding a large origami paper box which I inflated with my breath (air).

I mixed the samples of earth and water together to make a natural paint, and painted alchemical symbols for each element on the sides of the paper box.

I completed the elemental quartet by setting fire to the box, which burned to ash as the audience watched.
Posted by Penelope at 11:16 pm No comments: