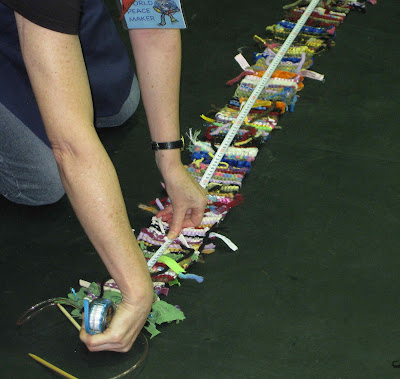 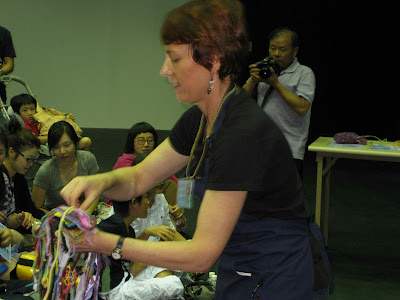 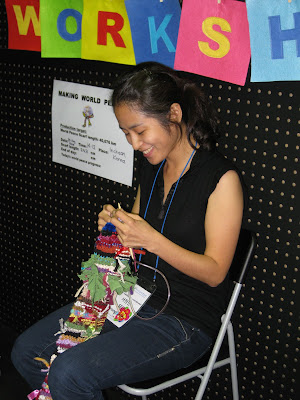 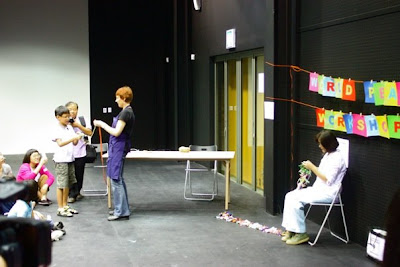 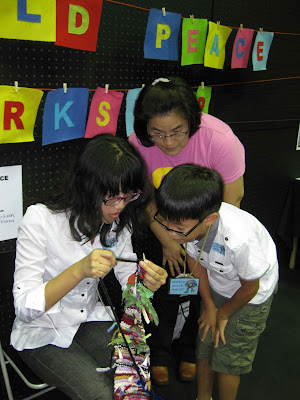 A large crowd of people participated on Sunday, August 30, 2009 in the "Making World peace" community art performance at the Incheon Women's Art Biennale. Thanks to the co-operative efforts of everyone involved we added a record 53 centimeters to the world peace scarf! Here are some photos from the day:

I created this project as a comment on the fact that world governments invest enormous amounts of money into “defence” and warfare, but almost nothing into the creation of peace. Ultimately ‘world peace’ can only come from the small acts of kindness and co-operation between individuals who decide to let go of the old ways of thinking and open their hearts to share freely with all people, regardless of family, racial or national background. I also strongly feel we all need to stop waiting for government funding and permission to create a better world - we can do it with the resources we have right now, through sharing, recycling and co-operation.

The very first performance was in Chilwon Middle School, Gyeongnam province, Korea in December 2004, when the artist was invited to the school as the first-ever foreign visitor and foreign artist. The project aimed to foster co-operation and awareness about the importance of both international and personal relations at a grass roots level. Initially the project was called “World Peace Production Room”, but later on the name was simplified to ‘Making World Peace’.

The materials for the world peace scarf are mostly recycled materials such as old ribbon, wool, string, plastic or clothing cut up to make yarn, and participants are often invited to donate materials to add to the scarf. The symbolism here is that we all have the resources to make world peace, and almost anything can be used as long as it is flexible enough to be joined together with the rest. This is just like the way in which all the different people and ideas can fit together peacefully in one world if we are willing to be a bit more flexible and join with others!

Since 2004, hundreds of people have tied pieces of yarn together, and knitted to make world peace. Their energy and good wishes are contained within the scarf, and I hope you too will enjoy making world peace grow towards its goal of reaching around the entire world.
Posted by Penelope at 12:30 am