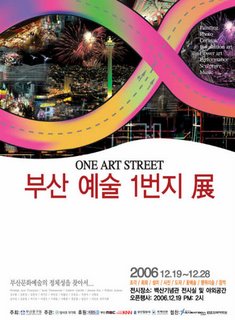 Today I did a performance for the opening of the ONE ART STREET exhibition at the Baeksan Memorial Hall in Jungangdong, Busan.This was a mixed exhibition from both local Korean and foreign artists - including photography, sculpture, painting, performance etc. - on show until Dec 28, 2006. 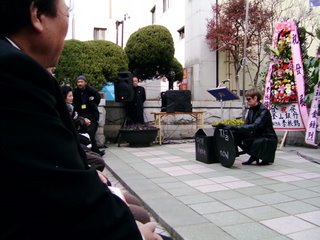 The area around the exhibition site was historically the real hub of art activities in Busan. It was known in earlier days as 'Art Street' and local artists want to see it happening again, to counteract the big shift of artistic happenings to the wealthy Haeundae area. My performance was called "Here & Now (TEAROOM no. 1)" and was a symbolic ceremony to celebrate the rebirth of the art scene in the area.

My performance was also a reaction to the Busan Biennale which finished recently, with the theme of art "everywhere" and CAFE (contemporary art for everyone). I wanted to show art as being "here & now" made by local artists and accessible to local people - and in the format of a traditional Korean tearoom, not a westernised notion of a cafe.

In the performance the artist rolled a circular black table (symbolizing "now") until it intersected with a square black box (symbolizing "here"). 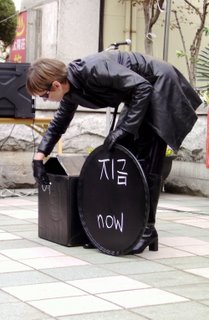 At the meeting point of "here and now", the artist performed a symbolic , ritual tea ceremony - concocting a multicultural and fragrant blend of tea and spices. 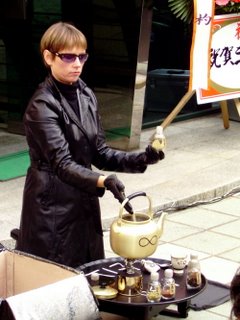 The spices were labelled (in Korean and English) as "courage","passion", "persistence', "self-belief" and "patience" -representing the qualities that artists need to make art. This was also relevant to the exhibition venue being the Memorial Hall for the Busan citizens' resistance against the Japanese colonial forces during the first part of the 20th century. 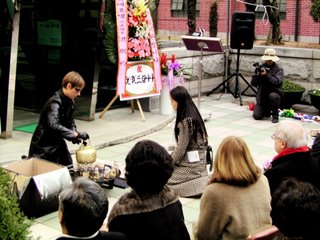 The tea was prepared in a teapot marked with an infinity sign, symbolizing the infinite power of human creativity and the infinite power of the "now" moment. The tea was called "infinitea".The audience members were all invited to drink some "infinitea" and thus share in the special energy of the moment.
Watch a short video of the performance:
Here & Now- TEAROOM No1- performance art by Penelope Thompson

Add to My Profile | More Videos
Posted by Penelope at 10:30 pm No comments: