Portrait of foreign artist in Korea, 2007 - performance and installation by Penelope Thompson 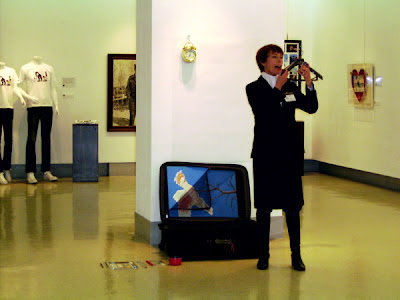 On Tuesday, December 11, I presented the opening performance for an international group exhibition in Ulsan, Korea.
The group is called I.C.C. - International Creative Community - founded in 2006 by Australian artist Lainie Cooper and Korean artist Kim Chang han. I joined the group a few months ago, as I had not been involved in the Ulsan arts scene previously and I liked the strong Aussie connection. 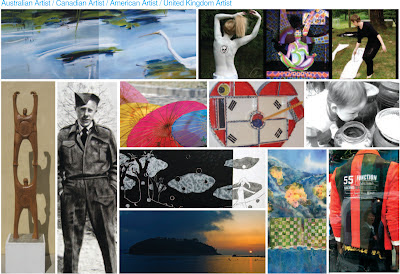 For this exhibition I decided to prepare an installation and performance similar to my very first art performance in Korea (Portrait of a foreign artist in Korea') that I did in Sungsan Art Hall, Changwon in February 2004. Click here to see 2004 performance .

The reason I chose to revisit this theme is simple - being an artist for a foreigner like me in Korea is still technically illegal under immigration law. It's a Catch 22 situation - there are no visas available for self-funded artists to stay in Korea, (only short 6 month Arts & Entertainment visas for entertainers sponsored by large companies), so to live here and experience Korean culture and make art, I have to remain an English teacher, but on an E2 teaching visa I am actually not allowed to partcipate in any other activities, even as a volunteer!

There was big kerfuffle last year when some Busan teachers put on a play for the foreign community and were subsequently raided by the police, arrested, and threatened with deportation. So it came as a shock for me to realise that three and a half years after my initial artwork on this theme, as a foreign artist I am still dealing with the same immigration status issue, long working hours as an English teacher, less than ideal living conditions, and little time to make art. Although I worked very hard to secure a higher level university teaching job that promised short hours and long vacations, those conditions failed to materialise.... It seems like it's time for a new plan of action.

In my performance, I begin zipped up inside a large suitcase and emerge to the ringing of an alarm clock. I hang the clock on the wall in a prominent position.

Then, I pull out a painting from the suitcase of an Australian native bird that I painted in Australia several years ago, and brought with me when I came to Korea. This painting shows the bird extending its wings while its feet are still firmly on a branch of a dead tree.

I contemplate the painting, open a new sketchbook, and sharpen a pencil. 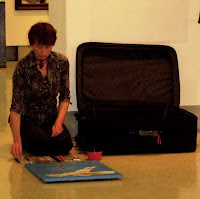 But a quick glance at the clock shows me it is time to prepare for my teaching job. So I put on my white shirt and formal black suit, covering up my comfortable colorful clothes, then zip up some hard black boots and proceed to teach an English lesson to the audience. 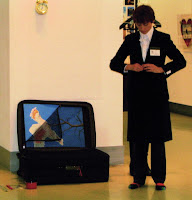 I pull out a whiteboard marker and draw an equals sign next to the clock on the wall. 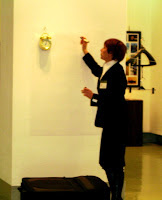 I ask the "class" to guess which common English expression regarding time I am trying to demonstrate. When I stick a 10,000 won note after the = sign the message is clear - "time is money". I ask the class to practice the saying with great enthusiasm, and then my English class is over.

Returning to the suitcase, I remove my teaching costume and begin to place the clothing very carefully on the hanger, arranging it so it looks like a person might still be inside. I take the whiteboard marker and quickly sketch a self-portait of my face in the sketch book. I tape this picture to the coathanger holding the suit of clothes, and arrange the boots so they stand to attention underneath the hanging skirt. 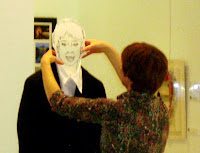 The final touch is to add lipstick to my self- portrait.

Then with more energy, I unwrap a new large paintbrush and a tub of red paint and paint a thick line through the "time is money" - blotting out the clock, the = , and even the 10,000 won note.
I write graffiti in large red letters on the wall - ART IS LIFE!. 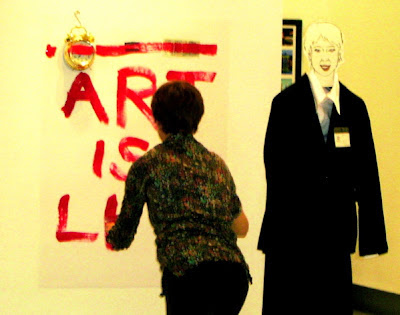 Finally, smiling, and with brush and paint in hand I leave the scene of the crime!

Here's the video of the performance:

Note for those in Korea:
You can see the exhibition (free entry) at Bukgu Culture & Arts Center Gallery, 1010 Saneopro, Bukgu, Ulsan until Dec. 20. Gallery enquiries Tel: 052-219-7400
Membership of I.C.C. is open to any emerging or established artists of any nationality who are interested in cultural exchange. Please contact Kim Chang Han: Tel: 018-591-3338
Posted by Penelope at 2:05 pm

I admire your courage and effort to be a performance artist here in Korea. Your newest show looks good. I'm sorry I missed the opening night.

I'm impressed your performance
in moving picture in your blog!

I'm your student who is taking one of your classes, Living Enlish (Fri 56). I've got my own blog but it's pretty difficult for me to deal with. I think I'm not so good at such technological things. By the way, I visited your blog few days ago but now I am leaving a message. First, I couldn't notice that you are a performance artist. Amazing~~ and I wonder if you are going to update your blog cause you haven't posted since last Dec. It's March already :)
See you tomorrow class.

hi penny!
how are u doing?
i saw ur blog and i am glad that u have been working for art.
it is really awesome.
it's raining today.
i hope u have a good day!

your perfomance is awesome

teach me how to upload a video

clip on the blog.

see you at tomorrow class ~

Do you remember? when I first saw you I said "you look artsy!" ..

hi there..how r u? u know I am one of your students..^^
living english#9 HONGIK
your blog is so awesome by the way.
so,,have a good day and see u tomorrow..
bye bye then..

I am very impressed by your perfomance even though it was a photo. the clothes are interesting

and I am sorry to hear that there is no legal way to stay Korea as an artist..

good luck with your work
and see you in class~