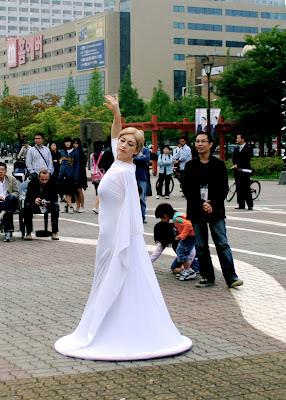 On October 2, I was invited as a foreign artist to make an opening performance for the 3rd Annual Goyang International Sculpture symposium. Goyang is located in the north-western part of Korea, close to the border with North Korea. The city is newly affluent and has set out to provide a special focus on culture and arts for its citizens, including an enormous and beautiful lakeside sculpture park. This sculpture symposium invited many renowned Korean and international sculptors, who spent 2 weeks creating large permanent sculpture works for the lakeside park.

The ferocious energy of Kali seemed to be the perfect counter-balance to the passive stillness of the white-robed statue woman in the first part of the performance. So when the woman tires of performing as the "beautiful object" and goes within,

she gathers all her repressed energy and emerges as a wild, black-clad, empowered woman. She wields a knife in one hand and the blonde hairpiece like a severed head in the other. This symbolizes killing off the old self, and cutting the ties that bind her to the old ways. 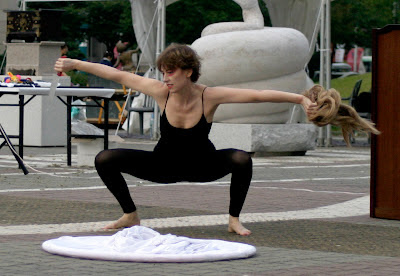 To end the performance she silences the ringing alarm clock with a single thrust of the knife, to show that she has conquered time. 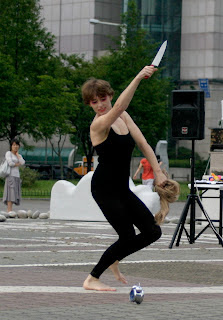 Fascinating stuff - I wish those kinds of things were going on when I lived in Korea!

Congratulations on the performance.

your perfomances are very interesting! It reminds me of a famous Video performance artist in Korea -Paik Nam June!