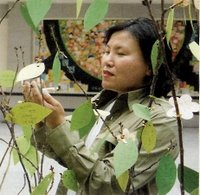 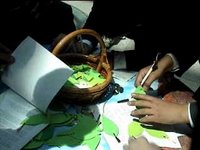 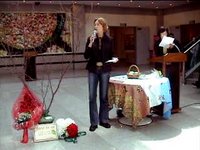 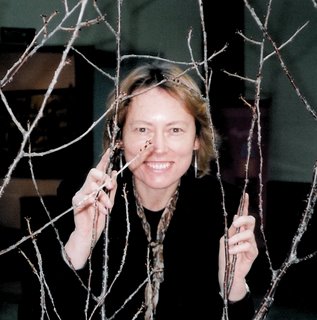 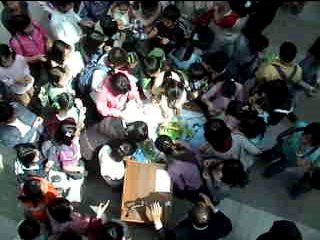 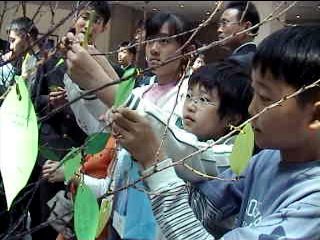 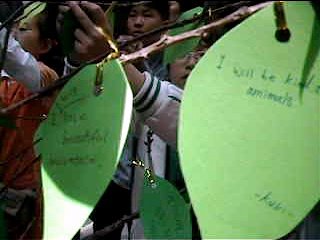 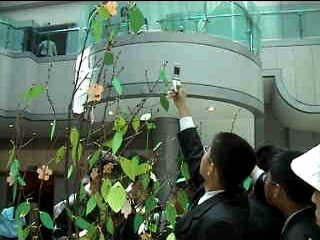 In April 2004, I was invited to set up an installation and performance for the Beautiful Changwon Festival in Sungsan Art Hall.
After pondering on how I could express the beauty of a Korean city such as Changwon, ( a modern, planned city in the southern part of Korea, set up to house provincial government departments) I concluded that the true beauty of a city lies in the hearts of the people who live there. After all what is a city without people? - just a bunch of concrete buildings and roads. Seeing as the exhibition would be held in springtime and the the beginning of the cherry blossom season, my idea was to create a kind of wishing tree.

I found a large section of bare cherry tree that had been pruned off in the winter. I then set about making paper leaves and flowers which could be tied onto the bare branches. I wanted people to be able to write messages on them about what they could do to make the world a more beautiful place. It took me a long time to cut hundreds of leaves , punch holes in them, and attach twist ties to every one.

Finally the bare tree was moved from my studio space in Busan to the Sungsan Art Hall in Changwon (about a 2 hour drive). I was lucky enough to find a student with a van just big enough to fit the tree!
The tree was installed in the foyer of the Art Hall and a ceremony was conducted to start the event. I had a Korean friend translate my words. When the public were invited to write their "beautiful" messages and add them to the tree, the response was overwhelming. I nearly got trampled in the rush!

People of all ages took part in this community event which remained installed in the Art Hall for 10 days during the community art exhibition. By the end of the period the tree had come to life, with literally hundreds of leaves and flowers all bearing positive messages.
Posted by Penelope at 8:32 pm